Home Uncategorized Home Sweet Home
Uncategorized
We’re BAAAAAAAACK!
*
We survived. More than that–we had a great trip. I was so proud of my planning self–we came in $75 under budget! It was a completely cash-only trip. Trent and I agreed the only time we would use our debit cards was to get Redbox videos along the way, and 2 Priceline hotels for the drive–$50 both times! Yeah! Don’t get me wrong, I’m pretty tired of picnic lunches, but we were in Disneyland for five days and ate only ONE MEAL at the park. But the biggest reason we were able to do this trip so frugally is due to the graciousness and generosity of friends and family. Thank you, everyone!
*
The trip recap will definitely be a multi-post. So many moments I don’t have pictures of, like how I had to squat in front of Sydney, helping her not to fall into grown-up toilets (which she’s not used to sitting on) in bathrooms clean and filthy from here to Southern Cal. I feel like I spent half the trip nose-to-nose with my baby, holding her by the armpits, pleading with her to please go potty. Then, inevitably, as I was bending down to pull up her undies and pants, she would give into the temptation and flush the toilet with my face squarely in the splash path. Awesome.
*
Speaking of Syd, I need to start with this photo, for my mom, who requested one of Sydney looking like she’s having fun. Turns out this is pretty much the only one out of 486 photos. Each kid will get their own blog post later this week, but let me just say that the Birdie DID have a good time, she just is not one to be overly expressive or to smile on cue. 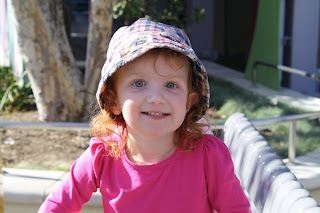 The following photos are just some of my faves from the week, in absolutely no particular order. Here’s one of my besties, Ms. KT, sporting a Krochet Kids hat, which you should totally check out. Fortunately, Kristi’s kids don’t read my blog, because she snuck out to Dland on Monday to hang out with us while they were in school! I’m not sure they ever found out, but we were so glad to see her! 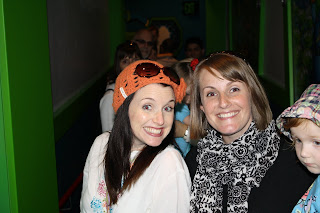 At first I was so sad that Sydney was asleep when we saw Woody and Jessie, because they are the 2 people she kept talking about seeing. But then we realized that she was not one to pose happily with the huge Disney characters. 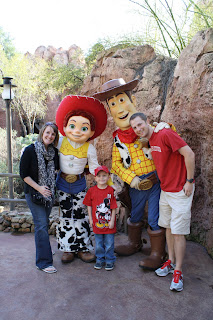 Case in point.
(But I do love this photo!) 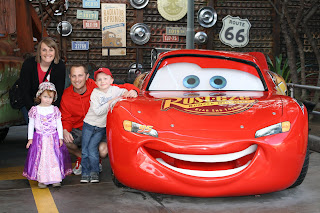 Oh, and by the way? I. LOVE. ROLLER COASTERS! I loved this one so much I went on it 4 times, even once walking over to ride it all by myself. Also by the way? Trent totally knew where the cameras were and he POSED for this pic. He looked exactly like this in every roller coaster pic. 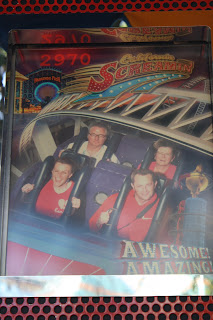 Case in point re: Sydney vs. Characters #2. Chip (or Dale?) pushed my sunglasses down right before this pic. 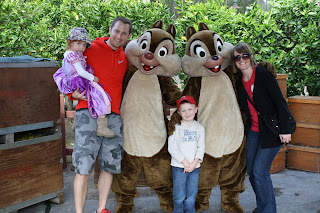 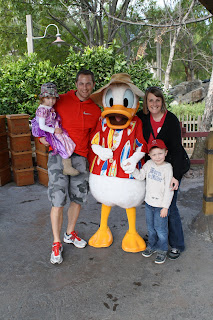 My parents-in-law joined us at Disneyland and it was so great to have them there! And not just because they helped watch and hold the kids! We got Linda to go on California Screamin’ (see above) one time…and one time only. But you’ll have to ask her about that. 😉
Here’s our Sleeping Beauty in her Rapunzel dress. 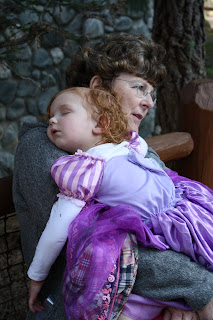 This is another bestie, who totally hooked us up all week! She just decided to make it her vacation week as well, and their family joined us as often as possible. I’m convinced her Love Language is “gifts” because she is always buying little treats or matching clothes for the kids. This particular day we decided to be matching too. 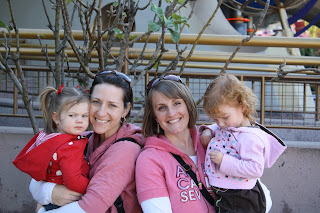 The mouse, the myth, the legend…ladies and gentlemen…
MICKEY MOUSE! (Once again, Sydney is non-plussed.) 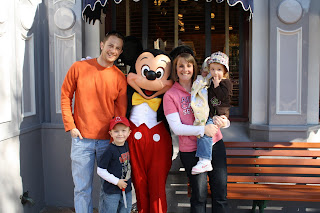 Here’s a chaotic photo-op with several of our friends with Jessie and the Army Man. 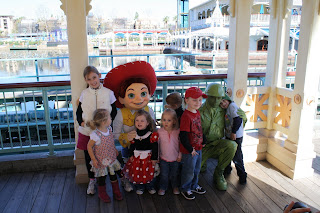 Thursday turned out to be a special day, when so many of our friends came to the park. We didn’t plan it, we just sent out emails to everyone telling them to come by whenever they could that week. It turned out this was a good day for lots of friends, so we partied! I thought it would be hard to have so many people there with us, but it actually worked out beautifully. We even managed to get a pic of all the adults in a Monster’s Inc car. 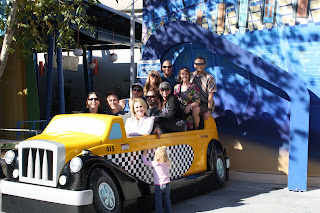 Then bring in the kids! 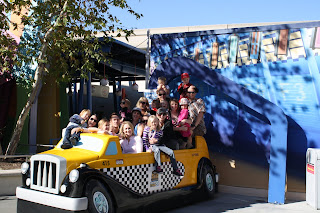 This is one of the only pictures we got of Disneyland at night. Partly because we were only there after dark twice. On Thursday night we stayed and got special tickets to see World of Color, which is a water and lights show. Describing it that way is pretty much the biggest undersell in history. It was so awesome we didn’t even attempt to take photos. The music alone left me speechless–and that is a rarity, let me tell you. It’s just something you have to see! 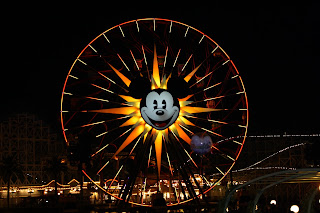 So there’s your first session of the post-millennial version of coming over to my living room and sitting down while I force you to watch slides of my vacation. Come on over a couple more times this week for the rest of the story. 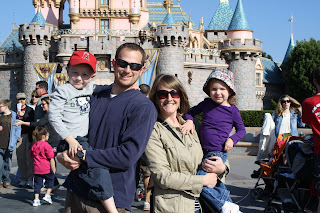