Home Uncategorized Kid Catch Up
Uncategorized
I’ve been posting a lot about our adoption process lately, so I thought I’d take a minute to update on Carson & Sydney. A lot of this is for my own records! You might think that I’m so involved in the paperwork and research for the adoption that I’m neglecting our 2 bio kids, but there is an amazing fail safe that keeps that from happening: the children themselves. A four and one year old DO NOT LET YOU forget their presence and their need for attention at any point during the day. No neglecting allowed. Period.
*
Sydney is almost 22 months, and is a character. However, she saves most of this character for our immediate family. Most of the time, outside the house, she is quiet and demur, sweet and shy. She doesn’t give up smiles easily. People frequently comment on her bright red hair and the fact that she’s so serious. But at our house, she is full of life! Sydney is a late-talker, but that doesn’t keep her from jabbering to us all the time. She screams and giggles, makes messes and annoys her brother to no end. My little angel gets put in time out multiple times a day for hitting, pinching, turning the TV off and on–basically your garden-variety naughty toddler behavior. Even though she can be a stinker, God answered my prayers and she is a SLEEPER! She sleeps a solid 12 hours each night, and takes at least a one hour nap. She’s also got a mouth full of teeth and one of them is definitely a sweet tooth! Here she is partaking in the leftovers from the Nike cupcakes. 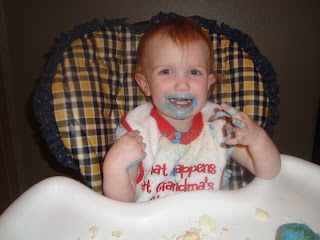 Although I’m still a total rookie in knowing what to do with it, I am head-over-heels in love with her wild, unkempt red hair. No picture can do it justice! 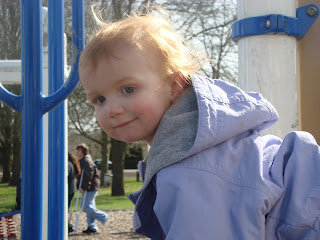 Carson is 4.5 years old. He is smart as a whip, if I do say so myself. He’s constantly saying things that impress me or crack us all up. For instance, if you didn’t see it on facebook, here’s a classic, random Carsonism: “Mom, a T-Rex wouldn’t want to eat me. I don’t have enough meat on me. [pause] A T-Rex would definitely want to eat you.” Thanks, Bud. A few weeks ago I saw him diligently drawing and I asked him what he was working on. “I’m making a map of our house. To show you where you’re allowed to go.” Of course you are! 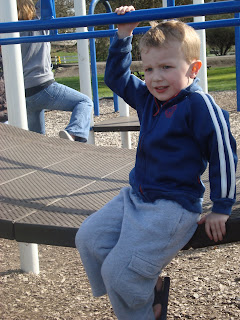 Mr. Carson is also my biggest challenge. He has a will that is stronger than iron and quite a little temper. I know in my heart that this will serve him well as he grows, but some days? It leads to the undoing of our household! I am learning every day what works and doesn’t work in raising this child o’ mine. And I know that a lot of his, uh, let’s call it “fiestiness,” he saves for me. For instance, I can not suggest (and never, EVER choose) an item of clothing, a certain pair of shoes, a television show to watch or a snack for him to eat. 99.9% of the time he will automatically say NO, and say it strongly and loudly. I cannot casually ask if he will please [put shoes on, turn the light off, get in the car, pick up that toy] because his reflex response is to fight, and fight hard–to the “death” so to speak. So, I have to get creative in my parenting. And by “creative” I mean “tricky.” I have to trick him into thinking what I want him to do is really HIS idea, and is actually what HE wants to do! Like I said–it’s a learning process every day! But he also shows us that he is a SWEET boy many times a day. He is kind to his sister, he loves Jesus, he prays for his new baby brother (he’s pretty sure it will be a brother), and he wants to please us and make us proud. Which he does very often! 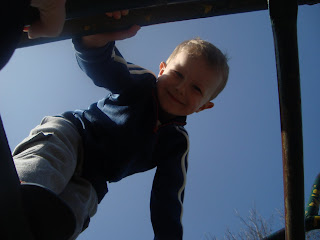 These are just some random pics from a Saturday when we took a family bike ride to Subway, then took our sandwiches for a picnic at the park. The kids really did have fun, even though this picture indicates otherwise. 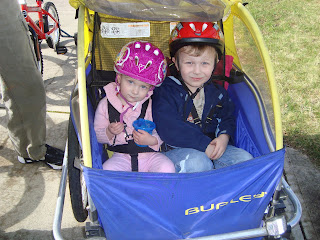 A little chilly, but can’t let that stop you in Oregon. 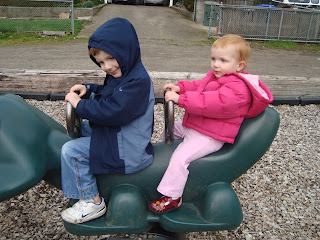 Random alert! Here’s some spring/Easter cupcakes I made. Very easy and very coconutty. 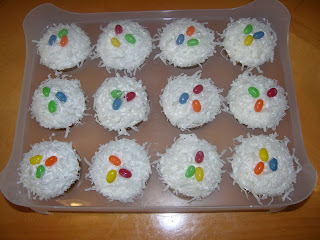 Much to Trent’s dismay, our dear friend Sarah & Tommy continue to supply the kids with Yankees gear. Sydney was lovin‘ her new hat. Checkin‘ herself out in the mirror. Looking good! 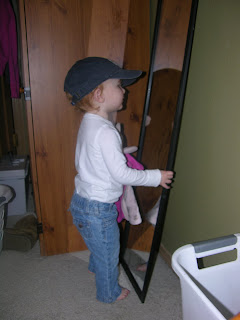 This may also seem random, but it was actually a significant moment for me. You see, when we do family crafts, I can always feel myself bristle at letting the kids do their (completely age-appropriate) messy versions of whatever it is. I know it doesn’t make sense, but that’s how I feel. This particular night, we were making individual pizzas, and Carson–totally on his own–made an actual design! And it was neat–and symmetrical! 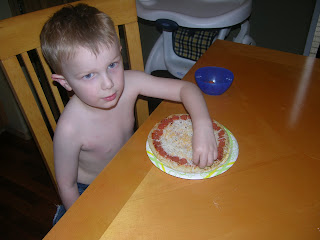 I was totally impressed with this face that he made on his pizza! Good stuff. Good stuff. 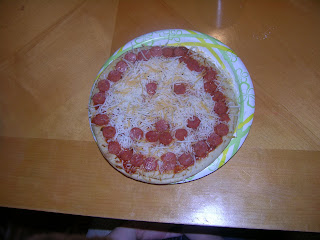