Home Uncategorized A long story about my awesome husband is.
Uncategorized
Background: I actually wrote the first half of this post in October. I was waiting to get the photos to go along with it. Then Trent got anxious about patient privacy and asked me not to post it. I had to wait 6 months, but last night I was able to ask the patient and her family for express permission to post this, first name included! So, here’s the first half of the story. I will try to post the marathon pics soon–they are still in someone else’s possession.
*
The funny thing about being married to someone in the health field (Trent is a physical therapist in neuro-muscular rehab) is that my glimpse into his work life is limited. He can tell me about his day, his coworkers, and sometimes he tells me he had a rough or a rewarding patient, but because of patient confidentiality, he can’t tell me much more. And he absolutely never tells me the name of any of his patients, even if I know them and they’ve said it is OK!
*
Then last spring he told me he was thinking about offering to push one of his pediatric patients in the Portland marathon. He explained that he had been working with this girl for 5 years and had gotten to know her and her family pretty well. She’d always wanted to be in a race, but her disease left her wheelchair-bound. Her uncle, who was a runner, had the idea to push her in a marathon, and Trent volunteered to share the pushing duties over the 26.2 mile course.
*
Finally, when all this was set in stone and the newspaper had been called, Trent agreed that I was going to find out anyway, so he could tell me this special girl’s name is Sarah. Sarah has arthrogryposis multiplex congenita. I’m sure I will give incorrect details if I give too many (and probably will anyway), so I will summarize and say that AMC is caused when any condition leads to lack of movement in utero, which causes the joints to fuse incorrectly. It’s characterized by multiple contractures (like fusing) of joints throughout the body. In Sarah’s case, long-term therapy (with Trent) helps her obtain and perhaps improve her movement abilities. I wish Trent blogged so he could tell you more! You’ll have to ask him in person.
*
Trent and Uncle Gary were both of the same mind that this marathon was all about Sarah! She had her own entry number and her name was on her special jogging stroller (that weighed about 100 lbs, mind you.) Trent said that virtually every person they passed was cheering loudly for Sarah! Other runners came up to meet her and cheer her on and encourage Trent and Gary. Having her name on the stroller was genius, because thousands of complete strangers were hollering her name for five straight hours! What an amazing and wonderful experience for her first race! He said it was everything they had hoped it would be. Trent and Gary switched off pushing the stroller about every mile or so, and they finished in just about the time they had expected. This was Trent’s eleventh marathon, so he’s had the rush of completing before, but he said getting to see Sarah with her own medal around her neck was rewarding on a whole new level. It probably goes without saying, but of course I will say it: I am so proud of Trent–not only for doing this selfless deed, but because it is an example of his passion for his “job.” It is that passion that makes him so very good at it. And I’m so glad to have a name with this beautiful person! Congratulations, Sarah, on your first marathon!
**********
February, 2010:
Last month, we found out that Trent’s boss (whom we love) had nominated him for a big award at the hospital, called the “Service Excellence Hero” award, because of the marathon. There are about a dozen people who get the Service Excellence award (WHICH, btw, Trent got 2 years ago already) and then 1 or 2 who get the hero award. Last year it was given to a nurse who broke hospital protocol and let a wife come and lay with her dying husband who was about to be taken off life-support so that she could say goodbye. (I KNOW, I’m crying just writing about it.)
*
Trent was actually a little embarassed when he found out he was getting this award. He said his loving co-workers were never going to let him hear the end of it! (Sure enough, they’ve all been teasing him about being their “hero”! But one told me last night that Trent is such a good guy that they really can’t be mad when good stuff happens to him.) I was thrilled to know that Sarah & her family would be at the awards banquet, & Sarah was called up on stage to help present it to Trent. 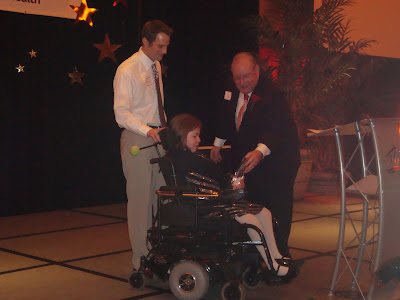 Because of the microphone situation, the board chairman didn’t have Sarah say anything, but did present the award first to her. 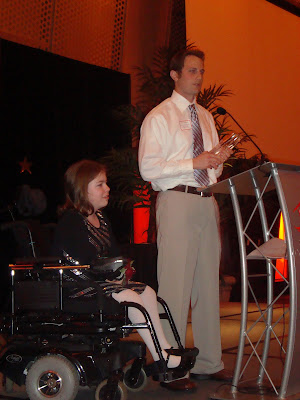 Trent didn’t KNOW he was going to be asked to say something! He graciously said that Sarah and her family were his inspiration and that they were truly the heroes. (Oh, did you just ask if I was crying? Um, why do you think these photos are blurry?) Here’s a shot of Trent and Sarah after the program. 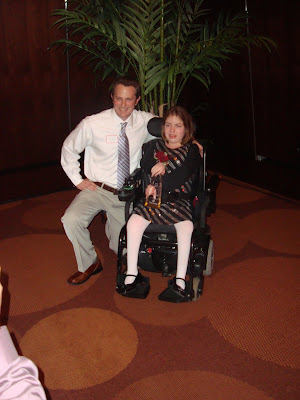 I can tell Sarah’s whole family loves Trent. Her big sis had previously requested to sit next to him at dinner. 🙂 I had a great time getting to know them last night. Afterwards, I talked to Sarah and said “I thought they were going to have you say something! Were you nervous?” She said, “I thought they might, but they didn’t.” So I asked her what she would have said if they gave her the microphone. She told me, “I would have said, ‘Thank you, Trent, for pushing me in the marathon. I will never, ever forget it.” 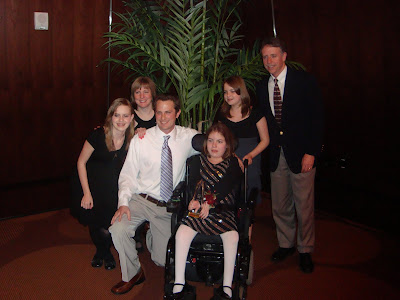