Home Uncategorized Vacation Pics
Uncategorized
Well, since I can’t invite you all over to my living room to show you slides, this blog post will have to do. Unfortunately, I don’t have the time or energy to give this the full Jenbunch blog-treatment as I would like. There were several long and hairy moments that would now–a week or so later–make some pretty funny stories. They are mostly due to the blizzard that hit us the day we needed to make a 50 minute drive to our the Polar Express. A drive which turned into about 2.5 on the way there and 3.5 on the way home. I’ll just say that maneuvering through the day and night was some of the most stressful moments of parenting I’ve had in the last 4 years. So, ask me about it when I see you and I’ll describe standing in the sub-freezing temps at midnight, wind and sleet pelting me, trying to get my screaming child out of his carseat and into the cabin whilst he is FaREAKING OUT with shrieks, shakes, then stiff-board body that there is a snow dinosaur next to the 2 foot snow-drift I was standing in that was going to eat us all. It was a hoot. But while I was dealing with my own snow-drama, some of the other families had it much worse–like getting stuck by the side of the icy freeway and stuck in a ditch. PTL we all made it out safely!
*
But, let’s back up! We first flew into Phoenix, where it was a balmy 50ish. We spend a day with our hosts, the Wooldridges, and their 3 adorable daughters. They have a play-house in their backyard that my kids fell hard for. They loved it! 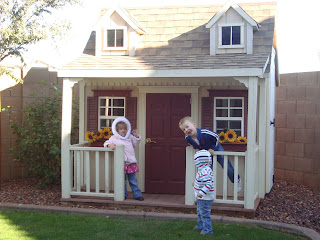 Then we drove up to a little resort-y town outside of Flagstaff where it was significantly colder. The Lyons met us there first, and Uncle Kipp brought a kid’s size snowboard. Fun! 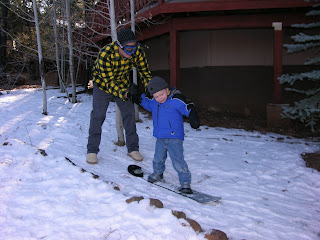 This is a fun little toy. It’s a “ranger” and is basically made for off-roading. Plenty of seatbelts, Mom. We all took turns getting rides. 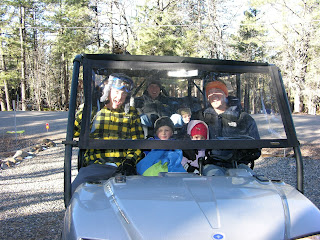 Random alert! This is a classic Sydney expression. “Not amused, Dad. Put the camera down, take these things off my head.” 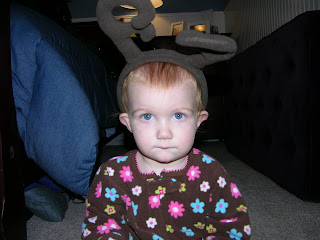 OK, back on track. We took the ranger down to the local park. For most of the week, we had temps in the teens, but no moisture. It was BITING cold, but easy enough to get around! Here’s Sarah and Peyton, aka: Princess Peypey. 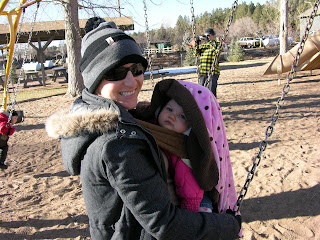 Here’s Miss Syd all bundled up and enjoying the swing. I swear it really was moving. 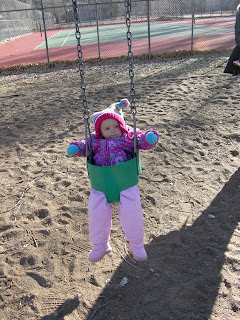 Old college roomies: Ashley, Kipp and Trent. Carlee is obviously taking after her mother in this picture. I think she was singing a song from Oklahoma…. 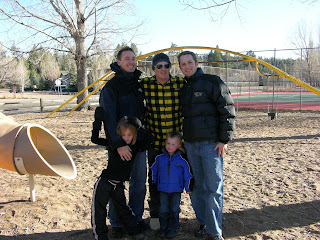 Mommies and babies are ready to go back inside the warm house! 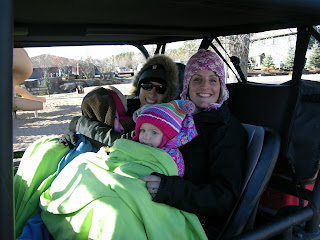 Here’s Sydney with the youngest Wooldridge, Avaree. She’s such a cutie! 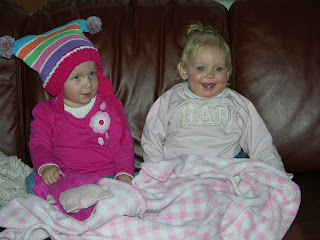 This is the event I did blog about from AZ. The local police & fire departments send around Santa & Mrs. Clause on a totally decked out fire truck. If you sign up, they’ll come to your house and bring stockings for the kids. Please enlarge to see Carson’s giddy expression. 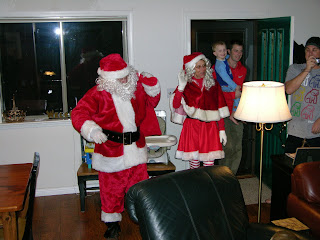 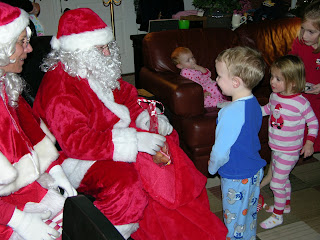 Here’s all the kids that were there that night. Haley and Lexi joined us the next day! 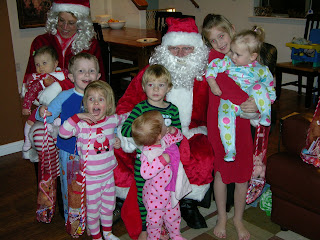 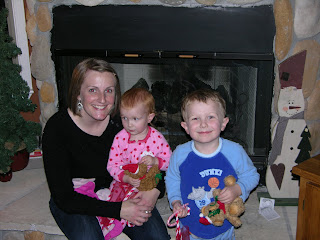 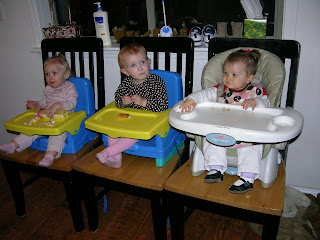 Then? The snow came. 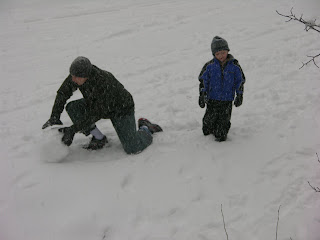 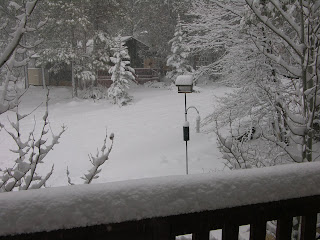 We spent most of the day inside, trying to keep the kids busy and getting ready for our trek to the Polar Express. We had no idea how dicey the driving would truly be! Here’s Trent and Ash and their baby girls. 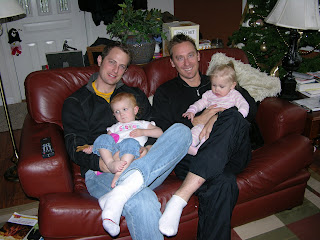 It was crazy trying to get everyone in their matching pj’s, cover them with snowbibs and snowboots and into the car with a few emergency things in case we had to spend the night in the other town. The long drive allowed for a few naps, but can you see the weather outside? 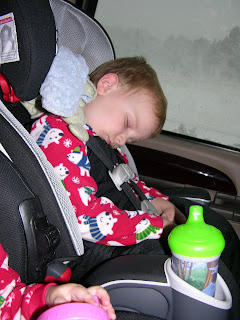 I know I have talked previously on this blog about how I tend to make unrealistic expectations and then get crushed when they do not come to fruition. This was a great example. We’ve had this Polar Express trip planned since March, so I was planning to take THE PERFECT Christmas card picture with all of our matching jammies! Well, Trent had been outside shoveling snow and fixing chains for hours, he was getting a migraine; I’d been frantically packing & caring for children during said migraine, shuttling screaming children in the snow and sleet–hadn’t done my hair or make-up all day, Carson spent half the train ride in the train bathroom: THREE times (once for #2, which he needed to completely de-robe from the waist down), he refused to take off his snow-bibs to show his pj’s, Sydney was snotty-nosed and snotty-attitude, our assigned seats were totally non-existent due to the blizzard, b/c they crammed anyone who showed up into the same train car–oh, and we had forgotten to buy Trent matching PJ’s, so he had to borrow some. Let’s just say, I had a pretty poppy attitude when this happy little picture was taken! I knew it would never get close to my Christmas cards. But the memory is blog-worthy! 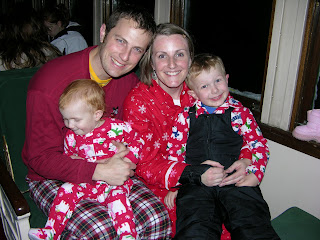 But the train ride itself was fun, and the kids enjoyed it (at least, when Carson was actually in his seat and not in the BATHROOM.) They did have cookies and hot chocolate, just like the book/movie. 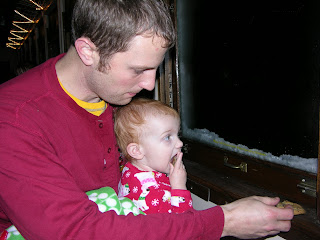 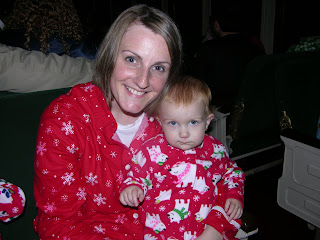 Carson finally took off his bibs (I mean, he had to when he went poop.) And I do think their pj’s are pretty darn cute! 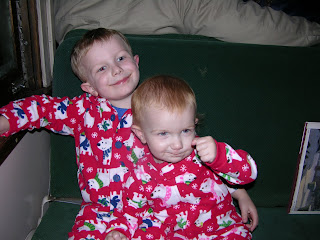 Even though they wore snowboots with them! 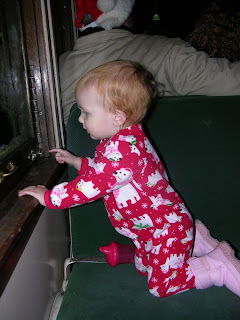 Here’s Haley and Lexi watching out the window for the North Pole. 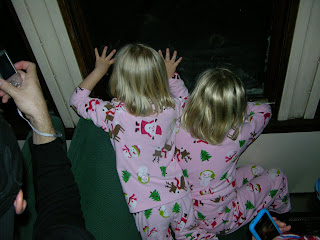 This is Carlee, Carson & Tanner. 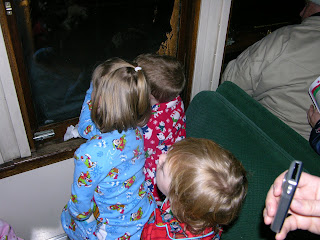 When Santa got on the train, it was one of those moments where you are just snap, snap, snapping away with your camera, hoping that one of the pictures will turn out. This one is cute, even though it’s a big blurry. 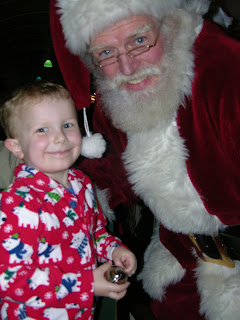 Santa gave all the kids a bell. Here’s Carson and his buddy Tanner testing theirs out. Oh, also? The train BROKE DOWN on the way back from the “North Pole.” The lights went out and everything. We just had to laugh! Well, we also had to listen to carols sung by our hostess. It was not pretty, people. Not pretty at all. Let’s just say that the cacophony of a bunch of kids ringing their bells incessantly was a welcome relief from this version of Rudolf the Red-nosed Reindeer. 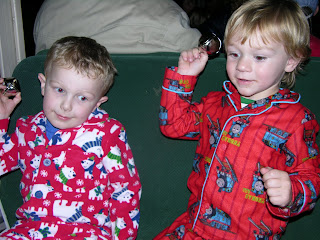 Oh, but overall it was a great trip with old friends. We don’t see them often, but our time together is cherished. To finish off the “can you believe this?!” theme of the week, Sydney screamed BLOODY MURDER for the final 45 minutes of our flight home. (And thank you in advance for all your well-meaning advice that I know you want to give it to me about flying with a toddler. I might be ready to hear it in about 2 years.) I was in tears. When we landed, Trent took her, I put my backpack on, and when the seatbelt light went off, he handed her to me and said “GO! GO! GO!” I carried her up the aisle and it was like the seas parted for me. The faces were filled with pity and irritation. (Well, that was only the 2 people I had the guts to make eye-contact with.) BUT, on the way TO Arizona, we had a pleasant landing! Carson even let Sydney sit in his lap as we taxied on the tarmac. This picture MIGHT be my favorite of the entire trip. It is precious, precious, precious, and makes up for every moment of stress and drama. 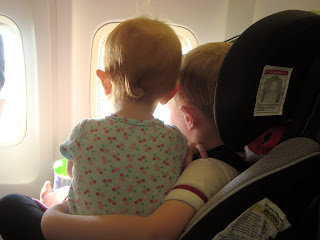