Home Uncategorized Bird Talk
Uncategorized
There has been a shift in the household during the last week or so, and that is that Sydney has become the more high-maintenance child. Now, Carson still completely takes the cake several times a day with complete and total tantrums, meltdowns, hissy-fits–whatever you choose to call them. But this last week Sydney has just been feeling slightly under the weather, and it showed. She doesn’t have a lot of huge meltdowns like her brother, she just manages a constant, mid-level whine that doesn’t stop. She knows a little bit of sign language, but doesn’t talk, which makes the day a game of “What do you want, sweetie?” And after the whining continues, and she shakes her head no to any solace you offer, it turns into a desperate plea of “WHAT THE HECK DO YOU WANT LITTLE GIRL!?” I realize she probably doesn’t even know what she wants, she just knows she doesn’t feel good. It was lasting for so long that I was beginning to worry it was a permanent personality change, but yesterday she totally went back to being her normal self: a bit whiny like all toddlers, but much more self-entertaining and happy.
*
Another Sydney-centric issue we’ve been having is the temp in our house at night. For some reason her room is at least 7-8 degrees colder than the rest of our rooms. And she happens to be the only one who doesn’t know how to keep covers on her. We have some fleece PJ’s, and I was layering her up, but I wanted to find a sleep sack for her like we did when she was a baby. I ordered one online at Amazon that had high ratings. It is hysterical! It is labeled as 12-18 months, and it would totally fit Carson! It hangs around her ankles like she’s wearing a sleeping bag. 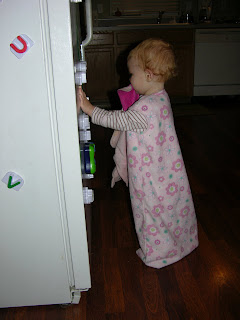 But it keeps her warm! You can’t see them, but it has little legging spots for her feet so she can walk. Sometimes she has to lift up the draping fabric like big dress so she can walk! This is one of the mornings she was NOT feeling well, as you can see. She’s also adopted the method of carrying Pinky Minky in her mouth. It must be a comfort thing, because she does it all the time–even during waking hours when I can’t sneak it away to wash it. Let me tell you: Pinky Minky is becoming Stinky Minky. 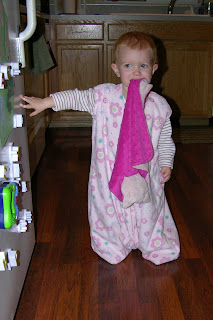 This is a pic from yesterday when she was feeling better. She was feeling so happy, actually, that she kept wanting to hug her brother. He thought it was sweet at first, but then would get a little annoyed with her. Here he’s trying to watch TV and she’s loving on him. I’m just glad to have my Birdie back! 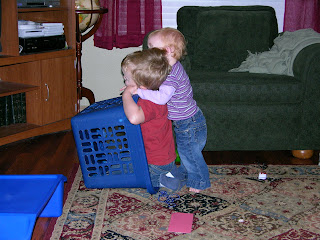