Home Uncategorized And it begins!
Uncategorized
SCHOOL!
Carson is now officially a student. He started today and won’t stop for many, many years. OK, I know it’s only preschool, but it’s quite a milestone for all of us. Don’t ask me if I documented it. You know I did!
*
Here’s the big school boy watching his one allotted episode of Curious George before partaking of a healthy breakfast of milk, peanut butter toast and kiwi. (On the side, not on the PB.) 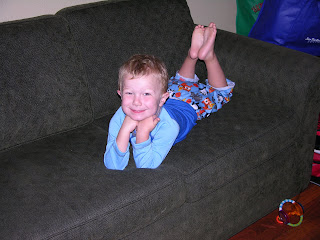 We had quite a few power battles this morning, and I really tried to reign in my control issues. Combing the hair was the first one. Clothes were the biggest one. I thought I was being so proactive and we chose some clothes last night, but I made a couple mistakes. First, the shirt he chose (from my approved list) was brand-new, and when he put it on this morning, it was way too big. The sleeves hung below his hands. So we had to pick a new one. I wanted a nicer polo shirt, he is rebelling against all things with collars. It was chilly, I thought he should wear pants, he wanted to wear shorts. We settled on NICE shorts that are long. He chose a ratty old sweatshirt that didn’t match his clothes and is too small, and he would NOT back down. I gave in on that one too since I at least approved of the shorts and the shirt, even though they weren’t my first choice. (But notice it is not in the pictures!) Also? We then argued over what SYDNEY would wear. I’m not making this up. He was adamant that she wear a pretty sundress (ironic, since HE wanted to be so casual) and I said it was too cold. He then wanted to choose her shirt AND pants, and I said he could choose one or the other, then I would choose a complimentary piece. It was almost funny if it hadn’t been so frustrating at the time.
*
But we made it to school in plenty of time to pay our tuition, make a stop at the little boy’s room and take some pictures. Here is Carson in front of the door to his building. He was a little unsure of the big kids going into their classes right next door. 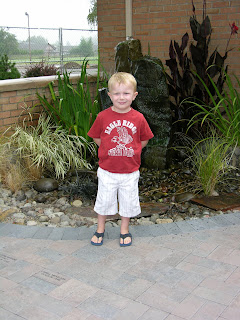 Here is Carson’s teacher! I’m going to try to protect a little privacy, so we’ll call her Mrs. M. We’re excited to get to know her better. Carson got very shy right here, but I told her that would last about 3 minutes. 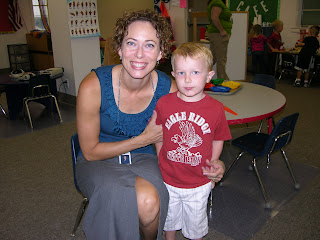 Carson immediately went to the toys, which we had seen on our scouting mission (aka: open house) last week. He dove right in, not seeming too concerned with me or when I was leaving. 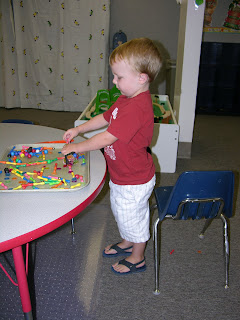 The classroom is very cute and looks just right for a preschool! 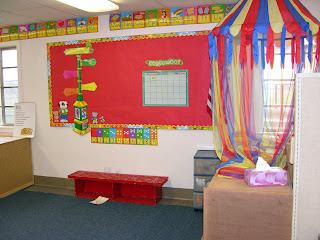 After a few minutes, I realized there was no reason for me to stick around, even though school didn’t officially start for another 10 minutes. So, I told Carson I was leaving, he said “OK!” and gave me and Sydney big hug and kisses and went back to this table with the ramps and the cars. I walked away thinking that it was rather anti-climactic, as I had possibly envisioned tears and drama, but I was SO relieved that it went the way it did. 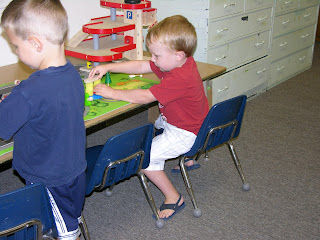 BTW, his teacher said their class is maxed out at 18 kids and they have THIRTEEN BOYS! Heehee! Please pray for Mrs. M. 🙂
© Copyright Jen Tompkins 2023. Theme by Bluchic.