Home Uncategorized And quite a yummy hobby it is.
Uncategorized
So, as mentioned in my last post, I’ve become very interested in cupcakes. I think it started with Sydney’s birthday cupcakes, which I was pretty proud of, even though they kept tipping over. Then, every time I went into costco, I was drawn the the beautiful pictures in Martha Stewart’s cupcake book. I saw some really cute cupcakes, and then one that was a cheesecake cupcake with an actual Oreo in the bottom of each one. I’m not going to lie: that was a huge selling point right there.
*
I bought Martha’s book and another one, Hello, Cupcake!, and have really enjoyed trying some out. The two books compliment each other well because they have totally opposite goals and methods. I mean, you know Martha. Martha’s all about making things from scratch with the perfect–sometimes obscure–ingredients. And not just the perfect ingredients, but she has all kinds of instructions about how the eggs and butter need to be at room temperature and not one degree cooler, and how you need to be vigilant to watch your candy thermometer in the corn syrup (which must be light), and that the egg whites should be gently whipped to small peaks, and that the graham cracker crust on the raspberry cheesecakes will only turn out right if you put the cupcake tin IN a roasting pan with about 3/4 inch of water while cooking. She’s a total cooking snob, but if you follow it precisely, you’ll end up with a pretty fantastic product. Plus, the pictures in the book are to die for.
Hello, Cupcake! is merely about decoration. They have the most creative cupcakes I’ve ever seen, from butterflies to bowling pins. The authors utilize all sorts of candies to accomplish their clever designs, but don’t spend time dealing with the ingredients of the actual cakes. There is an appendix in the back that has basic recipes if you care to go beyond a Betty Crocker box mix, but the ingredients list in the book for all the pretty designs say: 14 cupcakes and a can of vanilla frosting, some junior mints, a few red vines, etc.
*
ANYWAY, I have been experimenting and trying to remember to document my experiments when possible. I’d be more than happy to share any recipes with anyone, but I’m not going to spend the time to post them just in case.
The first cupcakes I tried were brownie cupcakes with lavender icing for Sarah T’s b-day. They were edible, but not beautiful, so I’m not too disappointed that I forgot to take pics. But of course, the next ones I had to try were the Oreo Cheesecake Cupcakes!
*
I only have one tired old cupcake tin…I really need to get another one. As promised, an Oreo at the bottom of each cake. 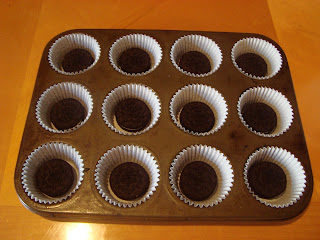 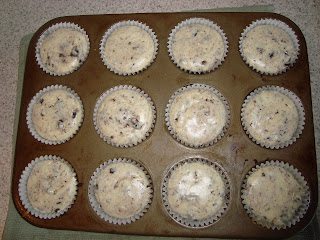 They don’t look like much, but they are yummy. So far they are Trent’s fave that I have made and I think they’ll become a standby. And no decorating, so they’re pretty easy! 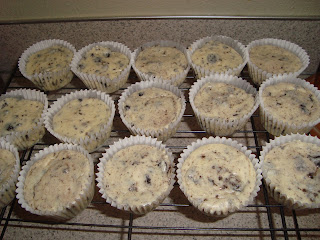 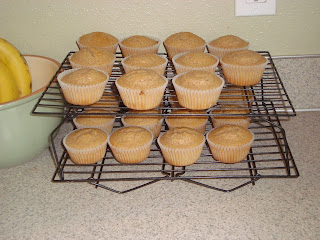 The frosting was rather high maintenance to make, the recipe made WAY more than I needed, and it doesn’t keep very long. They were yummy and cute, so I’ll probably make them again, but they really should be served the day they’re made. 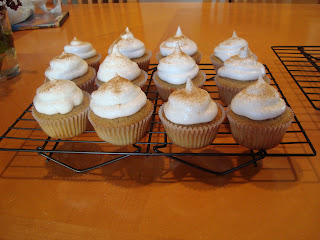 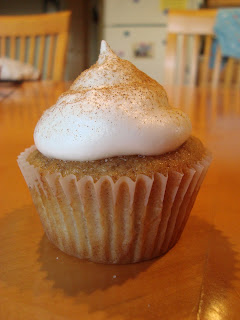 Here’s a question: when is a cupcake really a muffin? These were also from Martha’s book, but I think they are just muffins. They have a sweet cornbread flavor with the tart blackberries, and are very yummy. 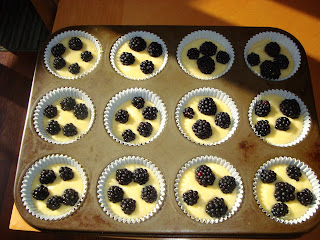 According to MS, if the oven is any cooler than 375 degrees, the berries will “sink straight to the bottom.” This batch turned out right, but the next batch had some sinkers. And you know what? They ALL TASTED JUST FINE! I’ve already made this recipe again. 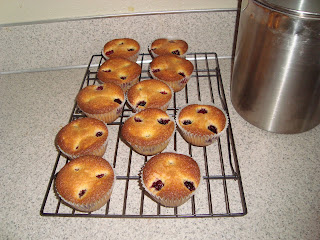 And then? Oh people. I’ve gotten a little out of control. I’m on a baking roll and I did something I’ve NEVER done before. I made up my own recipe. I had a bunch of wonderful ripe peaches, and I wanted to make a cobbler. But I had the idea to make little cobbler cupcakes. So, I took a pre-made pie crust and cut little circles out to make little cupcake/piecrusts. The uglier ones are made of all the dough scraps. 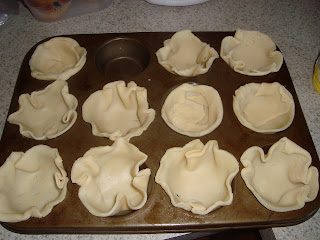 I followed a recipe for the peaches that a friend gave me on Facebook. It’s basically diced peaches with some brown sugar, lemon juice and cornstarch for thickening warmed in a saucepan. Then I put a spoonful of peaches in each mini pie. 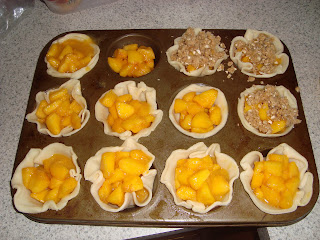 My favorite cobblers might fall more under “crisps” because I like lots of oatmeal and brown sugar, not as much the breaded kind. So, I basically copied my recipe for the topping in my apple crisp and sprinkled the crumbs on each mini-cobbler. I had to totally guess on the oven temp and time, but it seems 350 works for just about everything. 🙂 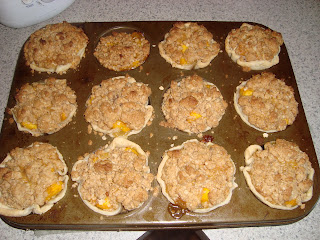 Serve warm with vanilla bean ice cream. It was great! Not perfect, but really yummy and I totally want to try it again. Look at me! I’m a baker! 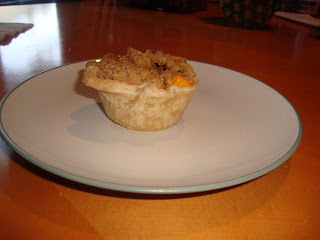