Home Uncategorized SOCCER
Uncategorized
A few weeks ago, Trent read something in the newspaper (or “papernews” as Carson calls it) that he has been waiting for…for YEARS. I kid you not. Ever since we found out we were pregnant the first time, he’s talked about how excited he’d be for his kids to play sports, especially soccer. Well, turns out there is a camp here in town for kids as young as 3. It is every Tuesday evening for 6 weeks. Now, as you will see, this is age-appropriate soccer. One parent pretty much has to be with the kid the whole time. The first night, Carson was disappointed he didn’t meet more friends, b/c he spent most of the night kicking back and forth with Daddy! They mostly do kiddie games/drills and then at the end everyone is let loose for 10 minutes of chaos.
*
This is a game where they move the ball like an “elephant” and some other animals I can’t remember right now. 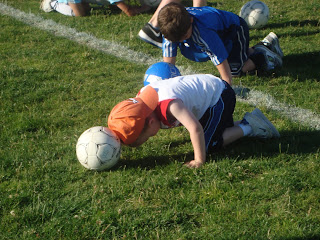 Here’s a sequence shot of C-dog working on his approach. 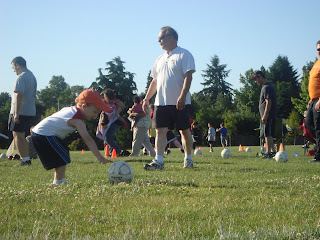 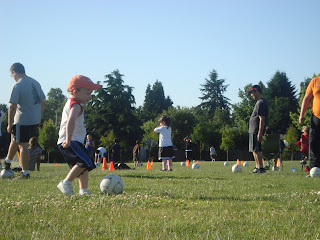 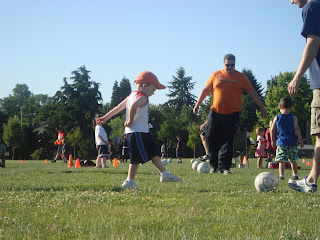 Here’s a bit of the frenzy when they were allowed to try a “game.” Not only did the kids miss the fact that there were supposed to be 2 teams, no one had any idea which way they were “supposed” to kick the ball, some kids just wandered off the field, others decided they were tired of not kicking the ball, so they went and got their own and threw it onto the field, some got bored and left, etc. It was quite amusing! This is a few seconds of Carson getting into it with some stinkin‘ cute twins who are older and more coordinated. He is quite taken with them and wants to stand next to them on all the drills and give them high-fives. LOTS of high-fives for the twins.

You can see he looks back at me after the goal is scored–even though he mainly watched and then ran into the goal post. But he was focused and running and we loved it! BTW, in case anyone was getting concerned, it is Trent that gives him a little toosh-smack on his way back into the melee. Not some weirdo.
This was only week 2, so I’d better warn you now that I’m sure more pictures/videos are coming. 🙂