Home Uncategorized Birthday Bash part 1.
Uncategorized
We decided to have Sydney’s birthday at the park this year, a perk for summer birthdays. (Her cuz, whose party was cancelled due to the snow storm, doesn’t exactly have that option!) We basically just had a “family” party, but even with both sides of our family, it’s way past 20 people!
*
For Carson’s first birthday, I was working and a bit stressed and it turned out I had to go to a funeral for a family friend that was scheduled 2 hours before Carson’s party. Needless to say, we he had a storebought cake, which was fine. But then on his second birthday, I started dabbling in fun cake decorating (with the infamous Elmo cupcakes), and I kind of got hooked! It’s really fun for me to be crafty in another way, but it’s too much work to do often.
*
So, for Syd’s b-day I tried a project I saw online. It was a several-day process of baking & decorating sugar cookies (my FAVE) and “grassy” cupcakes. In my head, they were stinkin’ perfect and adorable! The end product wasn’t bad! 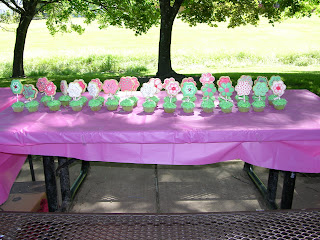 I won’t tell you exactly what went wrong, but five minutes before the birthday party was starting, 2 of my sis-in-laws had to frantically help me save the dream. Let’s just say the wind was not being friendly to my top-heavy beauties. But they were still fun and very yummy! 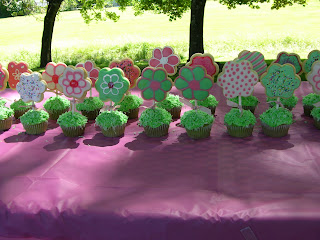 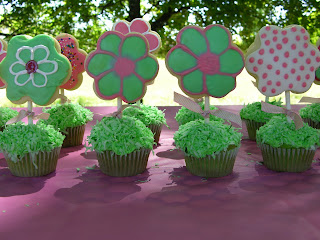 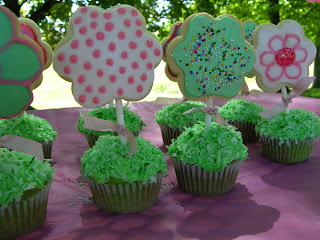