So, a few of my friends know that we’ve been going through a phase with Carson these last few weeks. He is suddenly very afraid at night time. It’s been a roller coaster between slightly scared/probably stall-tactic, to hysterical screaming, shaking and terrified crying MANY times a night. At first, he wouldn’t tell me what he was afraid of, he just said “Bad guys are in my room.” I didn’t want to ask any leading questions like “Do you think there are monsters in your closet?” because I can just see his little brain answering “Well, I DO NOW!”

I’ve sought advice from lots of different friends and gotten lots of good suggestions and support. It is getting better this last week. Glow sticks happen to be the current treatment that is making a difference. The trauma-stage seems to be past, at least. One friend suggested that I talk about the details of what he is afraid of in the morning, when the world is not so scary. I tried that, hoping to narrow down the specifics of what we’re working with here.
So the other day at breakfast, he told me he’s afraid of “the horse puppet.” Huh? We have no such puppet. He played on a stick horse at Nate’s–was that it? No, he answered, that was fun. It’s a puppet that looks like a horse. Oooookay. I figured he saw it on Sesame Street or something. Then yesterday we were at the indoor park. He brings to me a small cloth puppet. A horse puppet. Kind of like the ones they have on Baby Einstein. “This is it.” He said in a totally serious voice. “This is the horse puppet.” Huh. Interesting. “Why does it scare you?” “I don’t know, it just does.” So, stemming from some other advice I received (one dad theatrically wrestled an imaginary giant bug for his son) I dramatically grabbed the horse by the fabric neck and abruptly said, rather loudly, “YOU STOP SCARING CARSON!” That caught Carson’s attention and his eyes got big, so I continued my skit. I threw the horse down on the ground and I stomped on him. “You are just a puppet!” I said, drawing some attention from others. “Carson is NOT going to be afraid of you ANYMORE!” Still stomping. The other parents must have thought I was totally certifiable or violence-prone. (Or, like some of you–anti-animal.) “You are not allowed to scare him anymore, DO YOU HEAR ME?!” Carson was quite excited at this time and took his own turn stomping on the horse. Then we threw the puppet to the bottom of the pile of toys. Aaaaaand…….. SCENE.
It’s only been one night, so I can’t tell if this did any significant help to his “horse puppet” fear.
THEN, this morning, he was watching TV while I was in the kitchen. I can’t see the TV, but I can hear it. He comes running in with a genuine look of fear. “MOM! Mom! The frog is on! I’m scared of The Frog too! Come quick! Please turn the channel! PLEASE!” I knew what he was watching, and I immediately thought to myself: “NO. It can’t be! There is no way he’s afraid of…” but sure enough! When I came into the living room, he was pointing with an accusatory finger at… 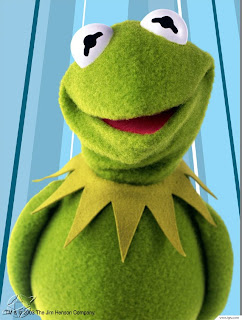