Home Uncategorized The Tattle-tale and the Bouncer
Uncategorized
We have a small house. It is great, and I love it. The way to get to the garage, where we park, is to go through a small laundry room. Well, my dear husband irons his own shirts, which is also great. But he usually leaves the ironing board up when he goes to work, and I don’t discover this until I’m four feet wide with a purse, huge diaper bag, infant carseat and trying to push big brother out the door. And, of course, we’re always late, and I have to shimmy backwards and unload, put the board away, then load up and shimmy out again. The ironing board surprise is never a pleasant one, and apparently I’ve grumbled out loud about this a few times too many. Because…
*
The other day Trent was getting the ironing board out before work and Carson told him very seriously: “YOU need to put that away when you are done. Mommy gets mad when you leave it.” Husband was quite amused by this and reported to me what he had learned. I pretended to be embarassed but was actually amused myself that Carson had done my nagging for me! (Hmmm…what else can I have him scold Daddy for?!)
*
In fact, he’s such a good little Mommy’s pet that yesterday when Trent was getting the board out, Carson stood up and cocked his head and lifted his eyebrows at his father. I wasn’t there, but Trent said it was hilarious how seriously he was reprimanding the adult with his facial expression. “You’d better put that back.” Then, a few minutes later, Trent reported to Carson in the kitchen that he had, indeed, returned the ironing board to its rightful place. Carson said (having heard it a few times himself) “Show me.” HA!
*
Also, we only have one couch in our house, so we tend to be there a lot. I now have many pictures of the kids on the couch, and I thought I would include some. This was a sweet moment when C-dog got out this little mini-Bible and started reading Scripture to his sis. 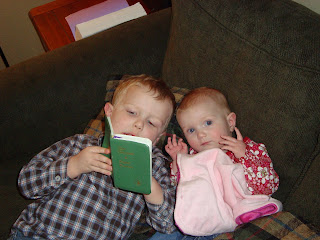 Sydney was mesmerized by Carson’s new hairdo and the jelly in his dimple. 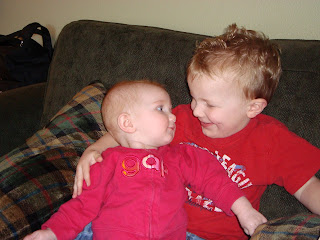 Can you even handle the cute-factor on this one? 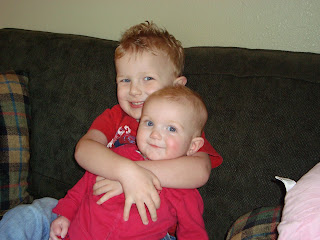 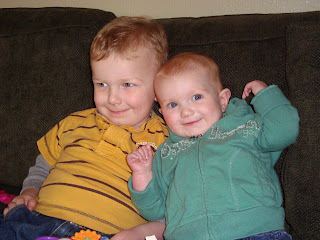 Here’s a great vid of Syd (I’m a poet) enjoying her Christmas present. It totally cracks me up! You can hear Carson in the background, wailing that he had been put in time out for some infraction.
© Copyright Jen Tompkins 2022. Theme by Bluchic.