Home Uncategorized Backflash: Christmas Eve
Uncategorized
I was scolded today for slacking on the blogging. Sheesh! But I do want to post pics of Cmas Eve to fully cover this year’s holiday, because, as I’ve mentioned, a huge part of blogging is for me to record stories and pictures for my own memory and keeping.
*
But first, really quick, I need to tell you we had two major losses in the Arctic Blast 2008. The first is Pinky Minkee, Sydney’s Minkee, which was lost in the snow as we hoofed it a block and a half from the bus stop to our house after we took a ride to the mall. The snow was DEEP, it was coming down hard, and we were both carrying kiddos, because we didn’t have the bjorn. The realization was a hard one, but fortunately, we have an in with the Minkee maker. (Grandma JoJo) Also, around the 21st or 22nd, Trent and Carson went out to play in the snow, and Trent came in and told me his wedding ring was gone. It gets pretty loose when his hands get cold, and he thought maybe it was in a certain area of the grass, but wasn’t sure. This was when the snow was the deepest, so it was futile to look. After our 4 days of Christmas with our families, enough of the snow had melted, and sure enough: there was Trent’s ring, right about where he thought it would be. Frozen in the ice! If you don’t think of Lord of the Rings when you see this, we may not have the same taste in movies. His favorite joke now is: “I should have thrown it into Mordor when I had the chance!” 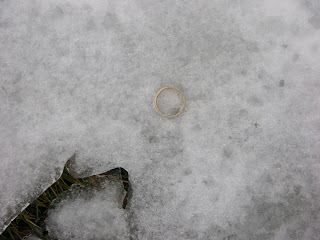 Now, onto Christmas Eve. This was spent with Trent’s side of the family.
*
Some backstory…it was very important to me that we all matched and got dressed up for Christmas Eve service. We haven’t all been dressed up since Sydney was born. I told Trent this about 10 days before Christmas (I actually asked him to wear something very specific and he agreed), but forgot to issue the passive-aggressive reminders as usual. Well, that will teach me! He forgot. To his defense, we did pack really quickly and earlier than we were planning. But the kids and I were all going to be quite dressy in red, gray and black. He brought khaki cargos and a blue and green shirt. I know I will sound like a total snob, but I think my exact words were: “Uh…NO.”
I knew that his sister Michelle had gotten him a gray and black sweater, which he was going to open AFTER the service. I made him open it early! I gave in on the slacks and he and Carson wore jeans, but he did have to buy some black shoes and belt at Fred Meyer, the only accessible store in the snow/ice.
As usual, my expectations for the perfect picture were a little too high and I don’t have any that I’m in love with. However, I have a picture in my head that I will never forget. I was singing a solo at the service, so I had to go early to rehearse, before the fam was dressed. They got there right as the service was starting, but I was singing first, so I didn’t see them. After I sang, I walked back down to where they were sitting, and there was my beautiful family. Trent, holding both kids, looking hot as ever. Sydney, looking outrageously adorable with a bow and tights for the first time, and Carson, so handsome with a tie and sweater. They were all grinning up at me, and I melted. I realized it wouldn’t have mattered if they had come in there PJ’s. That moment absolutely made my Christmas.
*
Here’s Carson, surely meditating on the birth of our Lord and not at all distracted by the fact that he is holding FIRE. 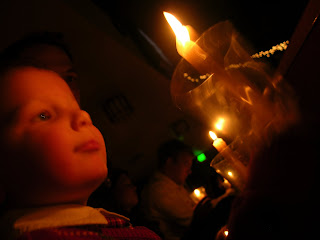 Here’s the best shot of the aforementioned outfits. 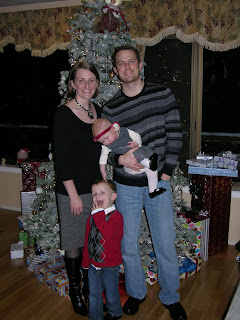 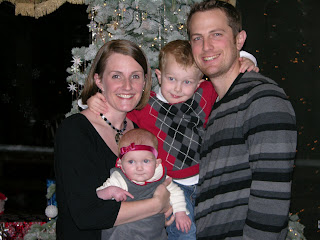 Some Wii was played by young and (ahem) not as young. 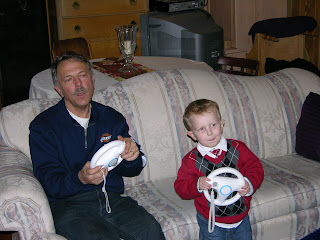 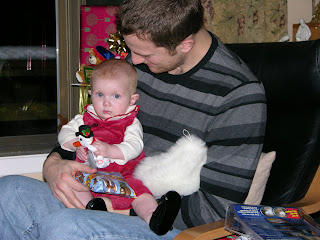 Here’s a picture of our family. I posted this one since it has Riley the dog in it, and also because it cracks me up that Chad is holding Sydney like a football. 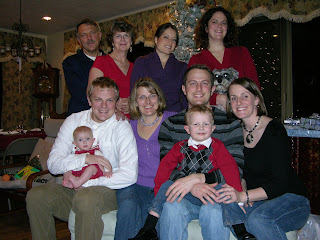 This pic is for Howie, who sent the bib. 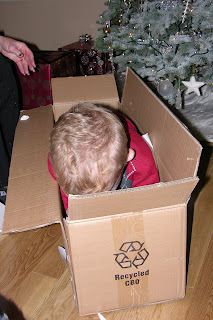 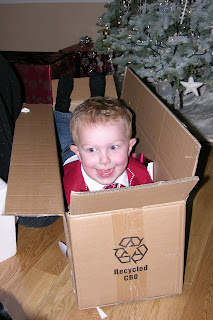