Home Uncategorized Ramblings
Uncategorized
First, I needed to post this pic of my C-man. Somehow, I hadn’t seen it until last week. It was taken by Mike at the beach last April. I love it. Sometimes I need to just sit and look at this picture, or go in his room when he is sleeping. It reminds me that he is little and he is precious and how much I love him. Our days have been seeing a lot of…strife is the word that comes to mind. Have you heard? The terrible two’s are so 1990’s. Three is the new Two. 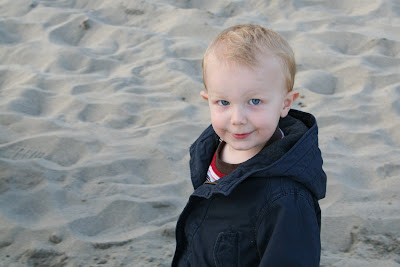 ~Sydney’s been rolling over for a couple weeks now. The first time was on some blankets on the kitchen floor as I made dinner. Sometimes I put things here on the blog so I can access them later for more permanent recording.

~Carson says he wants a pogo stick for Christmas. I have no idea where he even learned how to say that, let alone understand what it is. When he first told me, I was with my mom and we looked at each other skeptically. “What is a pogo stick?” I asked, thinking he had no idea. “Well…” he said thoughtfully, “…you put your feet there….and you grab on…and then…you BOUNCE!” OK! I acknowledged to myself. He knows what one is! But still don’t think he’s going to get one.

~Also, Carson asked for Mac and Cheese for breakfast this morning. For some reason, I agreed. Hmmm. Weird. Pick your battles, people.
*
~Last night Carson ate his taco down the center like corn on the cob. It all came crumbling apart, as physics would dictate. He dramatically whispered–to no one in particular–with palms up in the air: “WHAT have I DONE?!” Trent and I started cracking up.
*
This was the beginning of a longer post, but it was getting too long. I’ll finish the rest and post it another day. Let me just say I’m only partway through writing it and it already mentions Santa Claus and breastfeeding, so, yeah. Stay tuned for that one! Or tune out, whichever your preference.
© Copyright Jen Tompkins 2023. Theme by Bluchic.