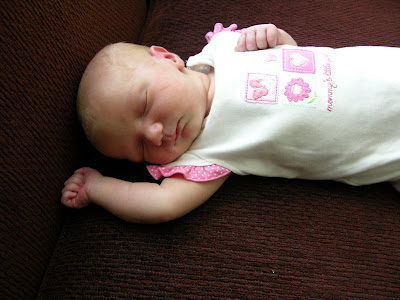 So, as previously posted, my labor and delivery with Sydney was much faster than with Carson. With Carson I had strong contractions less than 5 minutes apart starting on Tuesday night at midnight. He was born a short 36 hours later. In the meantime, my body was refusing to dilate, I missed 5 meals, Carson’s heartrate kept plummeting, and I was running a high fever. With Sydney, the contractions started strong around 4am, and we made some calls to grandparents around 5:30. The contractions this time were more painful and came a LOT faster–hardly time to catch my breath in between. I got an epidural and soon after measured at 9cm. Even as the epi was kicking in, I could feel the pressure that said it was TIME! I pushed for about 20 minutes, rather than 2 hours. The whole thing took 6 hours. It was still painful and exhausting, but about 1/6 the time! I think the fact that it all went quickly has already given me a head start on the sleep deprivation that is to come. After Carson was born, I felt like I had been run over by a truck and didn’t start feeling better or even a little rested for about 6 weeks. This time I’m still tired, but my body is not near as beat up as last time.
The timing was kind of interesting, because Trent’s family had a big extended-family camping trip planned for this weekend. After much debate, we decided to send Trent and Carson on the trip from Saturday to Monday. They offered to take just Carson, but he was already getting a little homesick, and so we thought it would be best if he had at least one parent with him. It actually worked out well, b/c my mom came to stay with me for the weekend, and she took care of me and Sydney like only your mom can. AND she cleaned my house, which was incredible. The boys had a great time and were excited to get home.

Now we’re down to the business of learning how to live with a 2 year old and a newborn. It has been interesting, to say the least! I will surely be posting more soon, but now I need to take advantage of toddler sleep time!