Home Uncategorized The NAME game
Uncategorized
Choosing a name for your child is a huge deal. It is the first major part of their identity, and even though they have no say in the matter, they have to live with it the rest of their lives! Some friends we know have their children’s names picked out years before they even conceive, and gladly announce it to the world. Others in our inner circle have chosen to keep the name a secret as an extra special something to look forward to on the baby’s birth day. There are fun things about both methods. With Carson, we had it narrowed down to four names by summer (Spencer, Chase, Morgan & Carson), then 2 names by September (Morgan and Carson). I really liked the nickname “Mo.” We honestly didn’t decide (although others thought we did and kept it secret) until about September 20, and he was born on the 22.
This time our tastes had changed a bit, so Morgan and Chase were out. (I still liked Chase, but Trent vetoed.) Some parents choose names with a purpose: they find a name with a deep meaning, or all Bible names, or all President names, or all K or J names. We go for names that we like and that are cool! How’s that for superficial?! (We do try to throw in a family name if possible.) For some reason, it’s also important to me that the name not be extremely popular. I frequently checked the Social Security website of most popular baby names for last year. (This probably stems from having one of the THE most common names of my generation. But, I’m not bitter, Mom. ) In the Top 50 is OK; top 10 is not. In ’05, Carson was 89th. Perfect. And lastly, this time I wanted a name that did not end with “n” like Carson. (Or Ethan or Nathan or Braden or Hayden.) Something different.
I feel like choosing a name is such a big decision that I don’t like to rush it. Trent was the opposite, and wanted to nail down a name as soon as possible, so we could start calling the kiddo by name. The weeks before we found out the gender, he was really getting down to business. Each night he would sit in bed with the name book and a highlighter, throwing ideas out at me while I tried to fall asleep. He thought it would be fun to announce the sex of the baby AND the baby’s name at the same time, but that was too soon for me. To me, it feels like choosing a wedding dress. It is such an important decision, and there are so many options, that I don’t want to have months to sit around and wonder if I made the right decision, thinking of other good options.
If it was a boy, our top names were Spencer, Brody, Max & Sawyer. Yes, Sawyer. Trent was really into that one. We actually decided on Brody, but that point was moot because it was a girl, and I was not ready to pick a girl name. But over the last couple of months, we widdled down our list. Some girl names we liked: Reese, Paige, Sydney, and even our joke-name Phoebe made it on the list after I met some really cute little Phoebe’s and my aunt informed me that it was my great-great-grandmother’s name! For real! But once we told Carson what we were thinking and he started calling her by name, it was official. To celebrate the decision, we had it embroidered on her very own Mickey Mouse ears. So, for those who don’t know, we are 99% sure (nothing’s permanent until the birth certificate is signed) that our little gal’s name will be…. 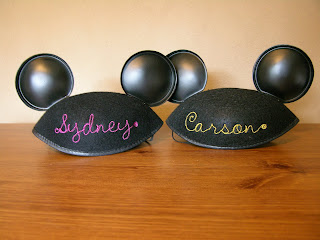