Home Uncategorized Close call
Uncategorized
Whoa. We almost just had to have our first conversation with a 2 year old about death. Our fish, Nemo, (yes, I know he looks nothing like Nemo) was milimeters from being down the kitchen drain. His poor little bowl gets very dirty because we are lazy pet keepers–which is precisely why we have a FISH, which is as low-maintenance as you can get. So, I decided that it was time to give Nemo a fresh bowl. I’ve done this a handful of times. My method is: I pour the bowl into the sink, until Nemo is close, then I pour Nemo and some water into a glass to wait for his bowl to be cleaned, then I pour him back into the clean bowl. Well, Nemo snuck up on me this time and he went into the sink with some of the dirty water. I seriously. Panicked. He was flopping around in/on the little rubber flaps of the drain that lead to the–ew–garbage disposal. His body was honest-to-goodness halfway down. Carson was right behind me, and I didn’t want him to know what was happening. I kept thinking: this is it! He’s going to die in my kitchen drain and sooner or later I’ll have to turn on the garbage disposal and I’ll KNOW what is happening! Against my natural instincts, I tried to grab this slimy thing and at least succeeded in getting him out of the dangerous clutches of the disposal. Now he was flopping on the white porcelain, begging for life. He slipped out of my fingers three separate times, and I even thought of trying to quickly fill the sink with water to save him, but there was NO TIME, PEOPLE! I finally got a hold of him and threw him into the empty glass and added water quickly. Fyoosh. First pet death avoided. Toddler child spared of devastating loss. 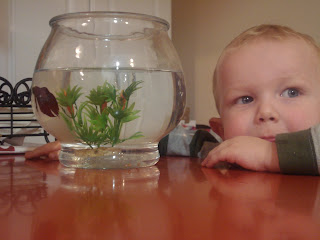