Home Uncategorized Awards Night (and a retraction)
Uncategorized
Yes, that sounds like the dinner you’d have at Pietro’s Pizza at the end of your T-ball tournament, when the coach would give out certificates to every player from Most Improved to Best Encourager. But this awards night was the dinner for the hospital employees, where Trent received his Service Excellence award. The retraction is that the person who informed Trent initially of the award accidentally misled us to believe that only one person receives the award(which I then posted on this blog), when actually it’s a small handful of people. But still….out of 3600 employees.
And several hundred were there last night at the convention center ballroom. Nice place, free dinner and drinks, and yes! The limo ride did happen. Every five years as an employee you get to come to this dinner and be recognized, along the few that get the service award.
There was a lady at our table who got the service award last year and she knows Trent. Apparently, the small group that wins becomes the selection committee for the following year. She went on and ON about Trent and told me that the initial nomination card (from a coworker) was nothing compared to the amazing things people said about him once they started interviewing patients and other colleagues. She told me about 12 times how proud of him I should be. I assured her I was. She also said Trent will be even more humbled when he sees next year how intense the process is and how many are deserving. This year 210 employees were nominated, about a dozen received the award. The employees recognized ranged from therapists to docs to nurses to janitors to cafeteria workers. It was really neat.
Anyway, it was a nice evening and fun to get dressed up and ride in a limo–first time since our wedding! It was POURING rain outside (of course) so no pics ont he outside of the limo, just on the inside.
The pregnant woman doesn’t have a seatbelt, but at least the guest of honor does. 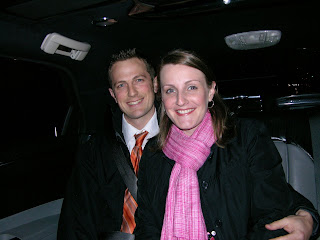 Each person who received the special award had to have a mini photo-shoot. 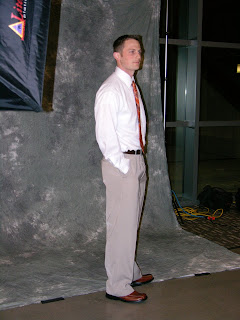 In the limo after dinner, holding his award. 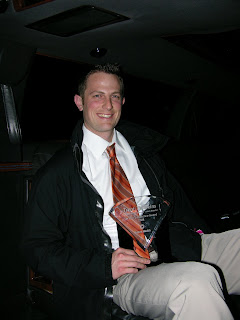