Home Uncategorized The Baffrobe
Uncategorized
Even before Carson was born, Trent has called him Baby Boy. He often says to him “Are you my baby boy?!” Which, you know, is pretty much rhetorical, but recently Carson has been answering. He says (and I type phonetically): “No! I not a baby! I big boy!” This is probably due to our encouraging the big boy attitude regarding all things having to do with the new baby coming and also to promote better communicatin, practice on the potty, etc.
One of the gifts he got for Christmas was from my Aunt Roberta. It was a bathrobe, and we told him that big boys where them. He loves it! He wants it after his baths and a few times he has put it on in the morning. It’s pretty cute. Thanks Roberta! 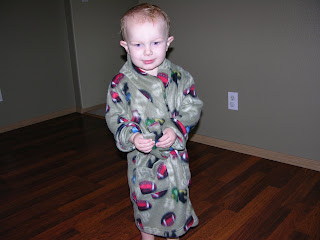 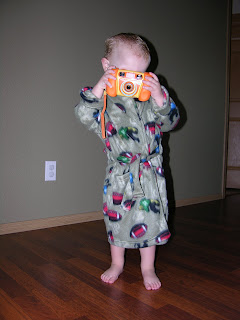