Home Uncategorized Really…I’m still alive.
Uncategorized
I’ve been chastised for not keeping up with my usual blogginess. Sorry about that. And at least 2 people (my husband included) have confessed that they open the page with some disappointment when they see “just words” and no pictures, so here’s a post to appease you illiterates. 😉
This is just a random, slightly out-of-focus pic of Carson yesterday, mugging as usual. In fact, this is the furthest I could get him away from the camera. For some reason the angle of the shot or the slightly oversized sweater makes him look like he has Popeye shoulders and skinny little waist, but I think it’s just an optical illusion. Carson has been pretty sick this last week. I’ve never seen him lose his appetite like this before. He hardly ate solid foods for about 5 days–just a bite or two here and there. We were force-feeding him smoothies and Carnation instant breakfast. I won’t get into great detail, but another symptom was explosive diarrhea for several days. In fact, he can now say “I have diarrhea!” And after “I love you” isn’t that a phrase you want to hear most?! 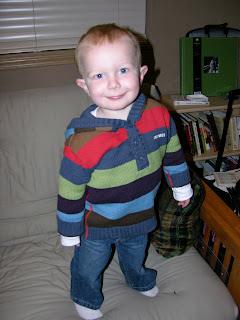 Yesterday I walked into the kitchen and he was sitting at the table drinking my water and looking at a toy catalog! I’m not making this up! I told him to point to what he wanted. 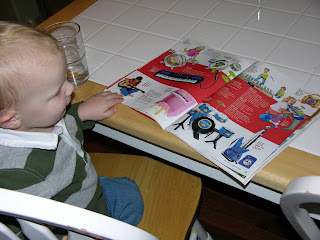 The drum set. Of course. I’d consider it, but not with “Shrek” on it, please. I’m averse to character-covered toys. Scarred by my JEM paraphanalia from the late 80’s, I think. 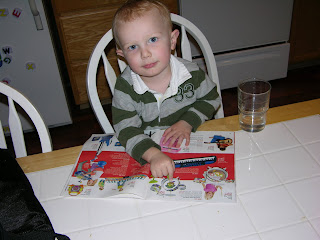 Also, I just wanted to point out that after a couple years of having most of my best buds from Oregon with a blog, three of my best friends from college have recently joined the cult, er, club of blogging, which I love! Check out the links on the right for Templetons, Lyons and Wooldridges. I love being able to see pics of their families since we are not together nearly enough. Now you all can blog-spy on them too.
© Copyright Jen Tompkins 2023. Theme by Bluchic.