Home Uncategorized Getting it ready
Uncategorized
As I pointed out before, sometimes when you are the busiest, and pictures would have been appropriate to document the busy times, that’s when you are least likely to stop what you are doing and grab a camera! Here are a few from the last couple of weeks. On a couple of really hot days, my mom and I did some big paint jobs. Carson’s room was such a bright royal blue, it was a little hard on the retinas. We opted for a lighter shade. It’s actually called “Ocean Ridge” if you care. 🙂 I am so bummed that I didn’t take a picture of our biggest job: the maroon wall. There were two walls, one of which was on a vaulted ceiling, and spanned the two major living areas of the house. It was a bright and poorly painted maroon color. We tackled it full-on, with two coats of primer, ceiling pant to clean up their messy edges, and my paint perfectionist mother who worked non-stop for three days! Thanks mom! 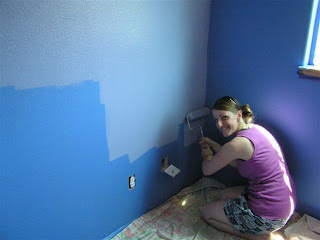 Move-in day! We had some wonderful helpers. I think that you find out who your true friends are when you move. Not only that, but these friends have helped us move TWICE in less than 6 months! Not only that, but a couple of them asked if they could please come EARLY! Thanks, everyone. Here’s the guys discussing their next task while putting the new BBQ together. 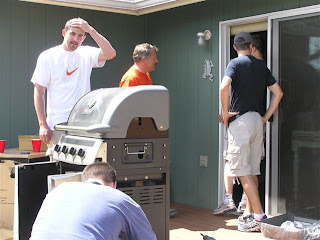 Not to be outdone, the girls tackled our new patio furniture! It was quite impressive, let me tell you. 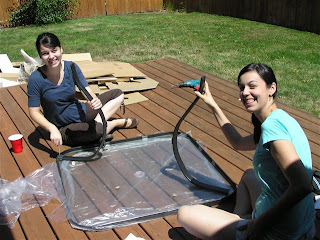 When most of the big stuff moved, we took a pizza break. 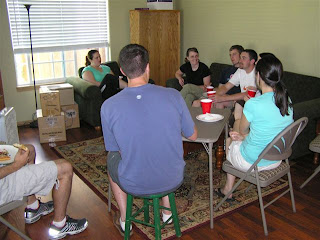 Gpa Roy and Gpa Phil put our bed together. 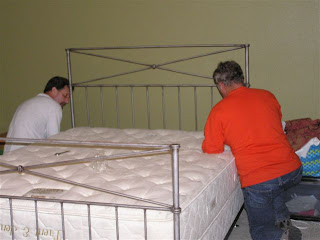 Did I mention that they also had to move a piano to a friend’s house? Thank you everyone for your wonderful help! We’re almost feeling settled, and I hope to get a few more small things taken care of (pic frames, towel racks) before I post pictures of what it looks like. Of course, it will be a while before we have the money (and time) to keep going on all the little things we want to add. (Who needs curtains?!) But it is fun to realize that we can do whatever we want, since we aren’t renting! It was worth the wait.
© Copyright Jen Tompkins 2022. Theme by Bluchic.