Skip to content
Yep. I haven’t blogged in long time. I don’t have a great reason, other than this: I didn’t feel like it! So many times I’ve wished I could turn blogging into a money-making venture (but the first step would be putting advertising on, and I’m not ready to make that step), but then in months like this, I’m glad that I’m just a little amateur blogger with a few loyal readers who will stop back in whenever they get a chance. If I don’t want to blog, I don’t have to! Plus, I know it’s going to be a LONG time before we have any adoption updates, so sometimes that takes the wind out of my bloggersails.
*
But here’s an update on something we’ve been doing this summer. For the first time, BOTH kids are enrolled in soccer camp through the city. It’s every Tuesday night for 7 weeks. Each week I am exceedingly amused by both of my children. Carson is totally in his element. He gets to run around with other kids and play games with a little bit of structure. 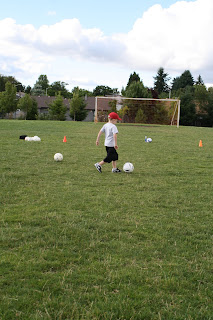 Carson (mostly) tries to listen to the rules of each little exercise or game, so that he can get going ASAP. He is motivated and wants to look like a soccer player and do well. He’s focused on what his teammates are doing and usually waits his turn with a patience that is never shown at home. 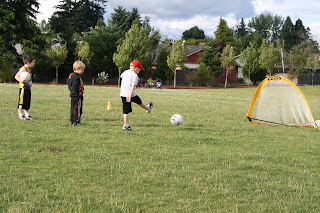 We couldn’t find his shin-guards this particular night, but I’ll try to post some with the guards. He looks pretty legit. And also like his dad/uncle. 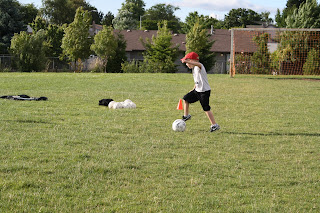 THEN, on the adjacent field, we have the Birdie. Not an athletic bone in her little 29 pound body. Not that we’ve done much to cultivate it. We don’t even have any sporty clothes for her, so she is usually decked out in colorful stretchy clothes of some manner. She makes no notice of the other kids around her, what the purpose of the exercise is, when it is her turn or where the soccer ball is at any given moment. She’s just a giggling, clueless little orange fuzz skipping around. 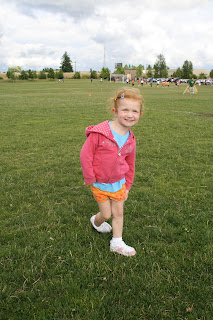 Now, granted, most of this is due to her age–I mean, she’s probably one of the youngest kids out there. But honestly, she’d be the stereotypical girl out on the field picking dandelions if this weren’t parent/tot class, and her soccer-loving dad were not by her side throughout the entire hour. Daddy says she has one speed, which is “casual.” She frequently la-dee–dahs away from the drill to wave, grin and give me thumbs-up. After soccer, she has way more to say about her ponytail (it looks like the babysitter’s!) than anything that actually took place during camp. 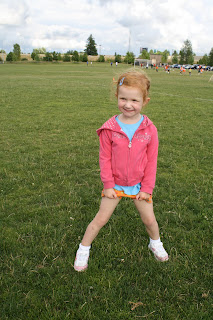 But I’m so grateful for experiences like this, and grateful that my kids (so far) seem to go with the flow. They are neither the aggressive kid obsessed with winning, nor the unwilling participant crying and laying on the ground. At least not this week. 😉 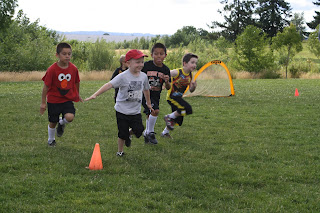 Plus it gives them both a time to blow off some energy. 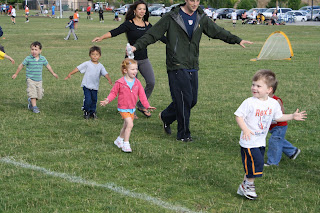 And a chance for Syd to have some special time with Daddy. 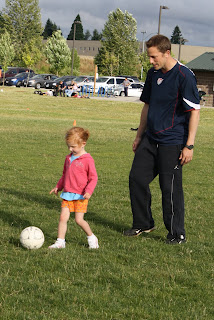 And after parent/tot is over, they come over with me and we watch the rest of Carson’s camp. 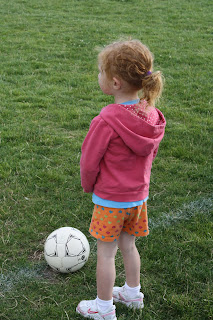 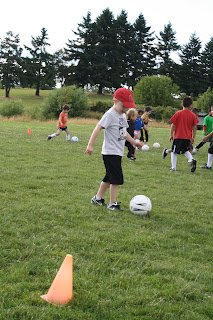 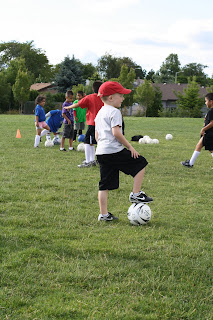 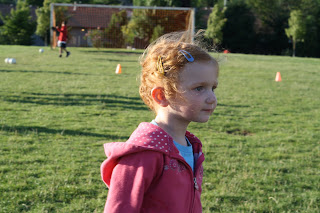 And Sydney will give big brother some tips on his game. 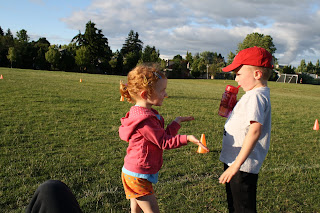 A few kisses and wrestles and then we all go home! And hopefully sleep very well. 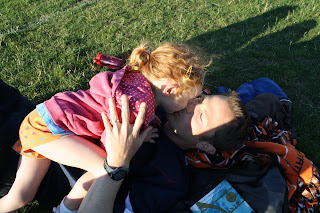