Skip to content
I have to say, Di, you are so sweet to ask for more details about our trip! Because really, this is the equivalent of trapping all of you friends in my living room and showing slides of our trip. Only this time you can browse quickly and/or walk out of the room and I’ll never know. 🙂

Part of the main reason we went down south over this particular MARCH weekend was so that Trent and some of the guys could relive their college tradition of going to Vegas to watch college basketball/March Madness games. We paid for two tix to Cali for the price of 1 ticket to Vegas. Then Trent drove with Kipp. It’s funny to hear them talking about being 30 year olds in Vegas. Forget losing at the slots–they put $10 on a game and it lasts them 2 hours of entertainment and trash talking. Also, they found themselves saying things like “It’s only 9pm? I’m beat! It feels like midnight,” or “Oh, I can’t have any of that; it does a number on my stomach.” I was proud of my lucky hubby who had a strict budget of $150 and came back with about $130, and that’s after meals! Of course we turned around and spent it on Disneyland meals, but still. It was impressive.

SO, while they were gone for 3 1/2 days, several of us mommies were left alone to tend to lots of kids, some of us far from home, slumber partying and house hopping. This was fun, but very tiring. Don’t forget, Carson woke up between 5:57 and 6:41 every single morning, no matter when we went to bed and no matter that everyone else wanted to sleep in. Keeping a 2 year old quiet in a small house is like trapping a rainbow. This particular morning Haley joined us for a 7am round of Toy Story. 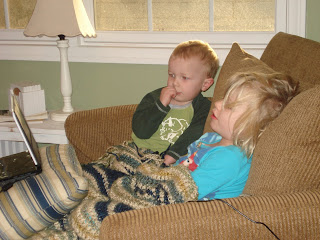 While the guys were gone the girls threw a baby shower for Stephanie and me. (She’s the one who is due with a girl the same week as me.) Steph is so adorable (and TAN!) with her first baby bump.

When the guys got back into town we had a big BBQ at the Templetons in HB. The Dad’s picked up pretty quickly that we were ready for some help in the parenting department. Trent was going to the store to get some food and asked if I wanted him to take Carson. That particular day I was close to a no-sleep, 6 months preggo, far from home emotional breakdown. I told him just to assume for the next 48 hours that yes, I wanted him to take Carson. 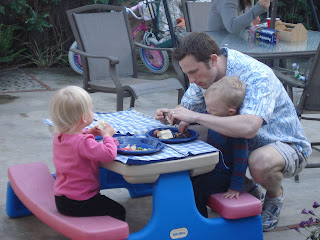 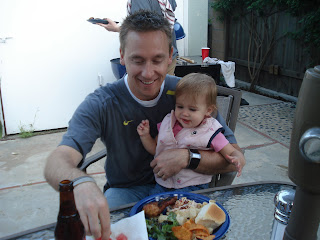 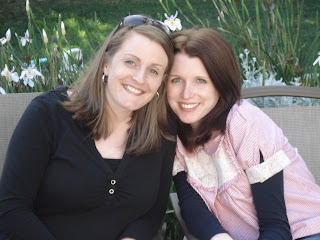 Ember and Chris. I think hanging out with all these kids might have been really good birth control for them. 😉 Ember is SO patient with all the kids. She’s going to be a great mom. (But NO PRESSURE!)

We got good at bringing Carson’s PJ’s anytime we were going to be somewhere other than where we were sleeping. Here he got to try a round of Guitar Hero before konking out in the car. 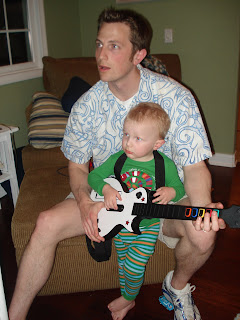 He needed his sleep, because the next day was Disneyland!